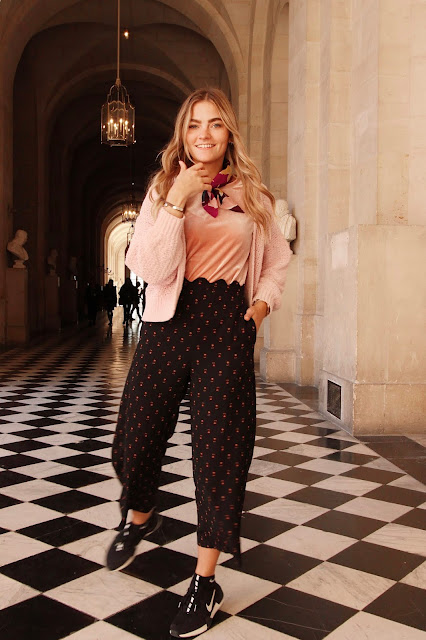 Château de Versailles is probably my favorite place on earth. When my therapist was asking what my "happy place" is, I immediately thought of Versailles. When I was in high school, I got to go to Versailles with my mom and sister and it was the best experience. I love Versailles for many reasons, but my I think it is mostly because I am completely obsessed with Marie Antoinette. When I first started writing this post, it started to get a bit too focused on Marie Antoinette, and so I am actually going to omit her from this post (to the best of my ability). She is so AMAZING and has so many complex things surrounding her, that I am going to have to write a completely separate post about her sometime in the future.

Ok, back to the Château. The Château, as some of you may know, first started out as a hunting lodge that was built for King Louis XIII. The King loved to hunt, and loved the surrounding forests near the lodge. The King then made it into a Château after his own mother, Marie de Medici (have you heard of her? she is an interesting character in European history), tried to take over his throne and so he sent her into exile and built himself a small Château.

King Louis XIII's son, King Louis XIV (the infamous Sun King), grew up going to the hunting lodge and loved the area of Versailles. When he became king, he decided to expand the Château in 1661. The Sun King was obsessed with decadence and relaxation, and therefore he wanted the Château to be a perfect place for those two things. The Sun King expanded the wings of the original Château, added the elaborate garden system that is still at Versailles today, and many elaborate details that make the Château so beautiful. The King then started a second expansion in 1678, which included the addition of the Hall of Mirrors and the Grand Trianon. While they were still in the process of adding the the Château, the Sun King declared Versailles to be his principal place of residence and moved the entire court from the Palais des Tuileries in Paris to the Château in Versailles.

During the short time the the Sun King lived in the palace permanently before his death, he established a strict court system that was followed by his successors until the French Revolution. I learned about this when I was a TA in Art History at BYU and loved the text from Jacques Levron that details the interesting day in the life of the Sun King. If you watch the movie, Marie Antoinette - you can see examples of the ritual -- here is one of how the Royals were dressed (sorry for the video quality):

These rituals in the video may seem bizarre, but they were actually part of the culture that the Sun King built at Versailles. Even the Sun King's own brother had to have the King’s permission to sit in his presence.

The Château de Versailles stayed relatively the same after the Sun King died and had some adjustments under each King after it, like the addition of Marie Antoinette's famous Hamlet in 1774. When the French Revolution started, there was the famous Women's March on Versailles in 1789, which lead to the Royal family being forced to return with the mob to Paris. Once the Royal family left Versailles, it was closed (but not before the mob ransacked it and destroyed many parts of the palace), especially any emblems representing royalty. All the important art was moved to the Louvre, and all the remaining art, furniture, mirrors, etc. were sold off in auctions. 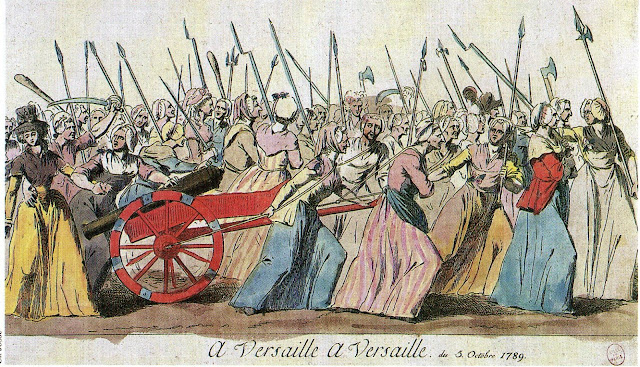 When Emperor Napoleon came into power, he almost chose to live at Versailles but changed his mind when he considered fixing all the damage that was made during the Revolution. Instead, he decided to refurnish and remodel the Grand Trianon and use it as summer vacation home. Below is a picture of me at in a corridor at the Grand Trianon and outside of it. I actually love the pink marble that the Grand Trianon has, it is so pretty! 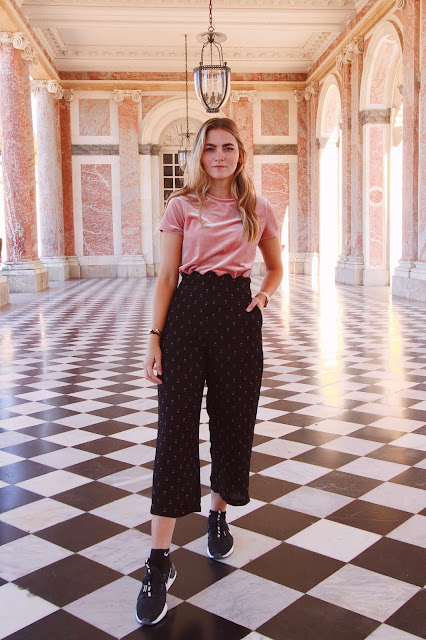 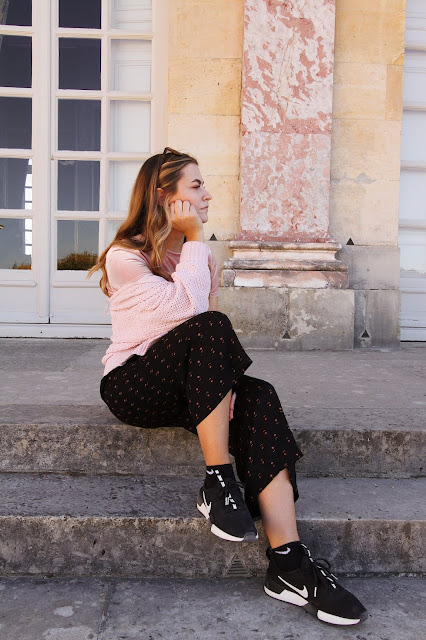 Another interesting part of the Château de Versailles is the Hall of Battles that was commissioned by Louis Philippe who came into power after the French Revolution of 1830. In his grand hall, there are large, almost life size, paintings of the great French battles from 496 to 1809. The hall is absolutely beautiful and I actually loved looking at the paintings as well. 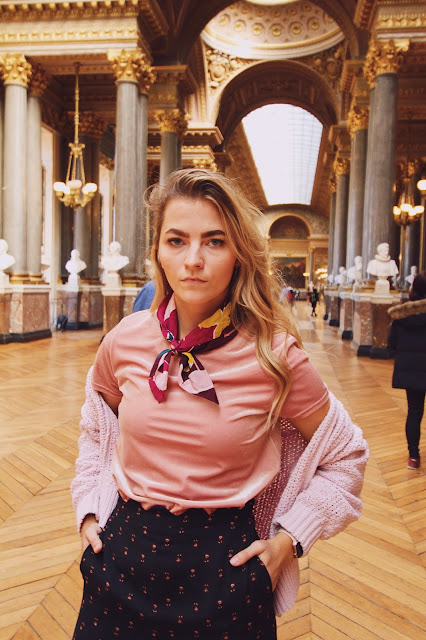 Speaking of Halls, one of my favorite parts in the Château de Versailles is the Hall of Mirrors. It would be so amazing to go there and be the only person in the room. Usually when you go it is full of tourists, which isn't so bad if you just imagine that you are hearing all the people at a 18th century masquerade ball instead, haha. Imagine how beautiful it must have been all lit up and everyone dancing in their beautiful gowns, if only... 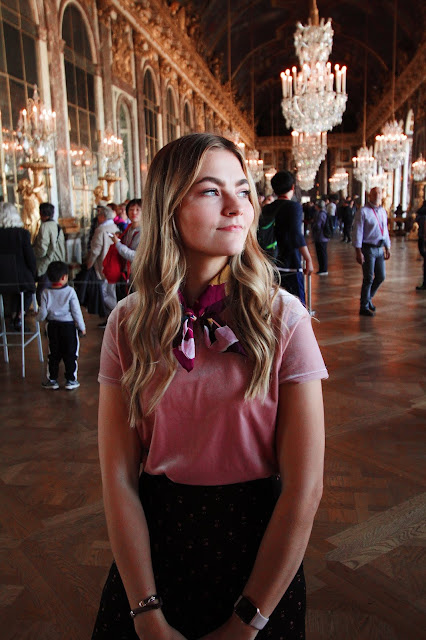 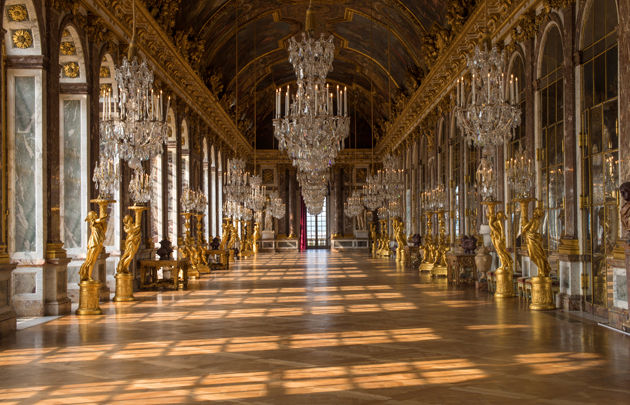 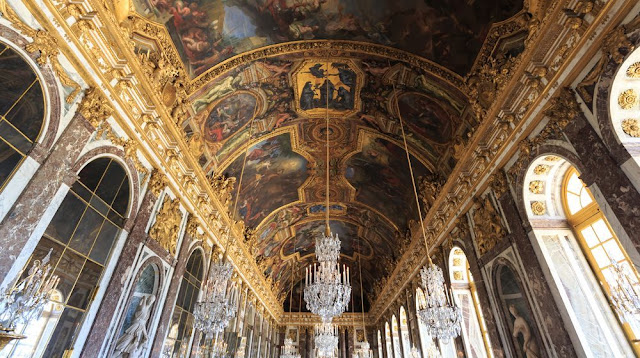 Well, I think I probably have given too much information for this post, haha! I really gotta get better at shortening them, but I guess that is what my instagram posts are for! I hope you enjoyed reading this, I know I loved writing it! If you are ever looking for a movie to watch, I recommend Marie Antoinette by Sofia Coppola. It is AMAZING. It has great shots of Versailles and has the prettiest costume design!

Love, caroline kristine ferrell at 10:58 AM No comments: 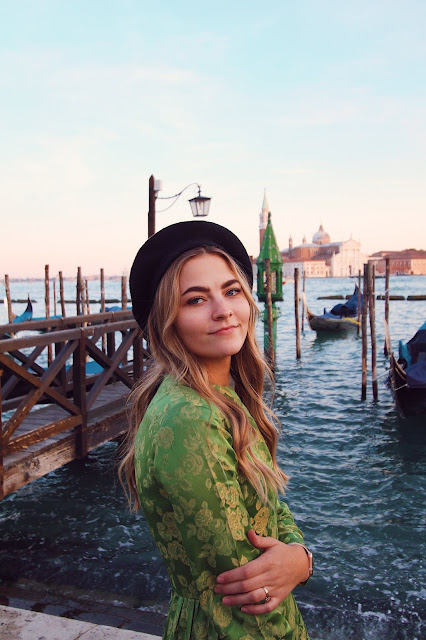 Hello! Europe posts are back, and I really apologize for the delay! My next city is Venice!

I have been to Venice three times, and each time I have been captured by its unique beauty. This last time, Venice was even more fun because I had the knowledge from my Art History major to appreciate the architecture and art of the city. We were only in Venice for 24 hours, but it was a fun quick trip! 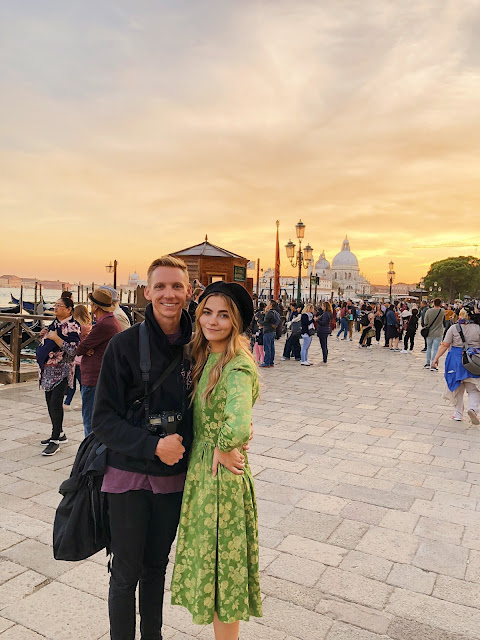 One thing that Venice is famous for, besides the whole being suspended on water thing, is Saint Mark's Basilica. What I really I love about the basilica is the byzantine art that is inside. When I was studying Art History at BYU,  I had the option of either taking Medieval Art or Byzantine Art class. I ended up choosing Medieval art, which ended up working out great because it is where I got the idea for my ORCA grant (side note: would you guys like to learn about my experience with that?), but ever since then I have felt sad that I haven't taken the time to really get into Byzantine Art. So this post is great because I had to push myself to learn more! 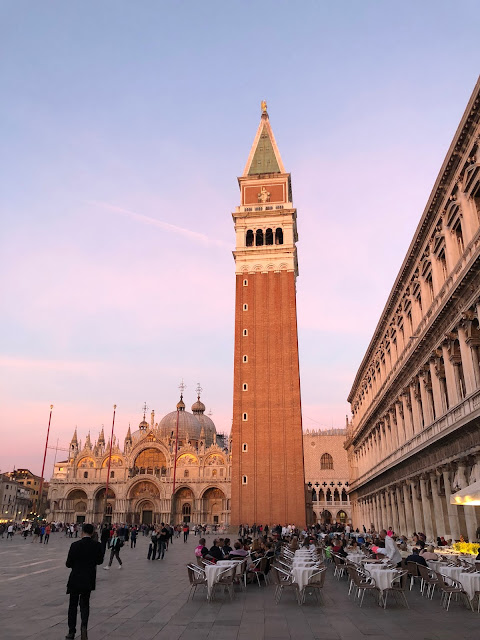 When I was researching St Mark's Basilica, I was shocked to learn that the story behind the Basilica's patron name. In 828, merchants from Venice snuck into Egypt and stole the body of St Mark the Evangelist. When they were sailing back to Venice, there was an awful storm that almost caused them to drown. They were luckily saved because they said that St Mark appeared to them and told them to lower their sails, therefore they said that St Mark saved their lives through this great miracle. This  tale is showed in one of the mosaics in the Basilica - see below:


There are so many mosaics inside St Mark's Basilica that it can apparently cover 1.5 football fields! Isn't that so bizarre?? Gold is my favorite color and I just love looking at all the gold in the basilica. It is so amazing that they were able to make such intricate mosaic ceilings centuries ago! The gold in Byzantine art is supposed to reflect eternal life, and it was what they believed heaven would look like, and it really is so beautiful and heaven-like when you look at it! 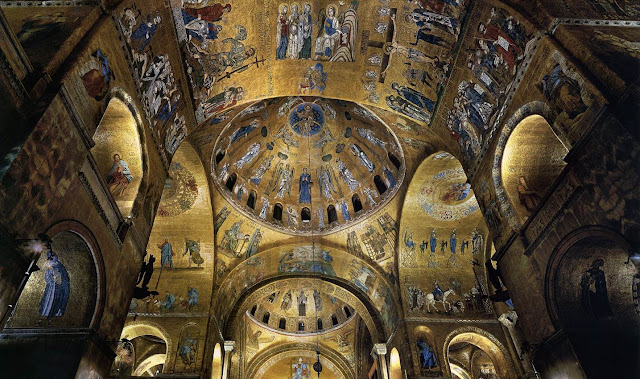 Along with their being so many mosaics, there are also 500 columns inside and on the exterior of the Basilica. In my photo below, you can even see some of them! Pretty amazing. Along with the columns, there are statues on the basilica that come from the many crusades lead by Constantine in the 1200s. 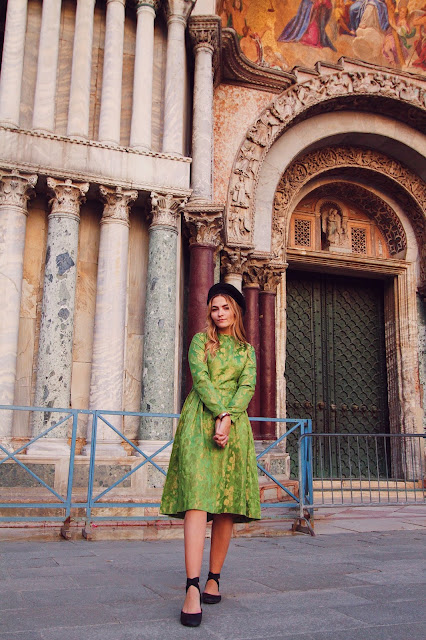 Lastly, inside the basilica there is the Pala d'Oro, which is an altar made out of byzantine enamelwork. This altar is fantastic because it has almost 2,000 gems on it and is made of gold. This altar was commissioned by the Doge originally in 976, but was altered a bit overtime by different Doges. You may be wondering why so much money was put into this piece of art, and that was because altarpieces were a sacred and important part of the catholic faith. The imagery on altarpieces act as guides for the worship of Christ and for the sacrament. Members depended on the imagery to evoke certain feelings and in some cases they would use them to imagine themselves as Christ. I love studying altarpieces and seeing how the artist interpreted different stories in the faith.  In this particular altarpiece - there is the life of Christ shown, and also Christ in Majesty. These two images help guide the sacrament and are often in altarpieces. There is also the life of St Mark on the altarpiece, which also isn't surprising since he is the patron saint for the Basilica. There is a lot of imagery going on in this altarpiece (enough for a blog post), and so I will just leave it at that haha. 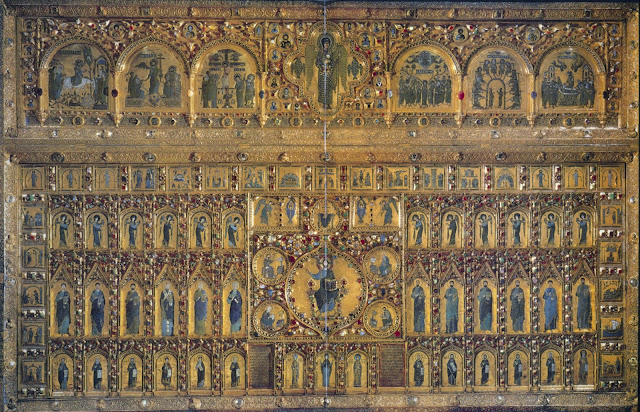 This post turned out to be focused a lot on St Mark's Basilica, and I hope it didn't bore you too much! I hopefully can find time in the future to talk about the basic history of Venice, especially since it is a really unique city. 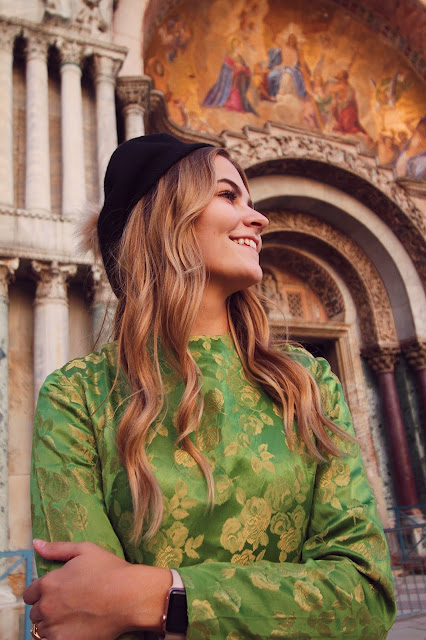 In a non-history subject, Venice is also now home to my favorite gelato ever, Suso. I loved this gelato so much that I wanted to go back before we left in the morning, but it opened at 11 and we had to leave at 10:30 :( so close! Also, my cute dress in these photos is actually vintage! I got it from one of my favorite vintage shops - elberta vintage - check them out! :)

Email ThisBlogThis!Share to TwitterShare to FacebookShare to Pinterest
currently in Venice, Metropolitan City of Venice, Italy

caroline kristine ferrell
fashion and art history enthusiast. relating the fashion of today with the fashion of the past.
Newer Posts Older Posts Home
Subscribe to: Posts (Atom)