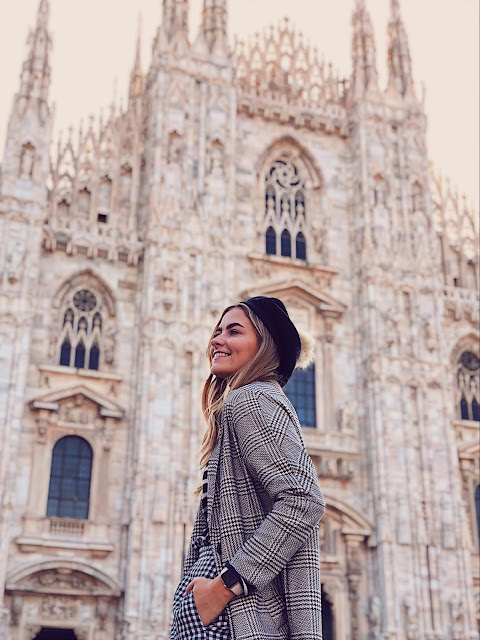 One thing you will learn about me as a traveler is that I do not like wasting time. Michael makes fun of the way that I don't like to relax on vacation. Honestly, I just love exploring and I love to jam-pack my days with everything! When it comes to Europe, I basically run on adrenaline cause my body is so so tired from the long long days & I am happy as can be when I am exhausted in Europe, haha! 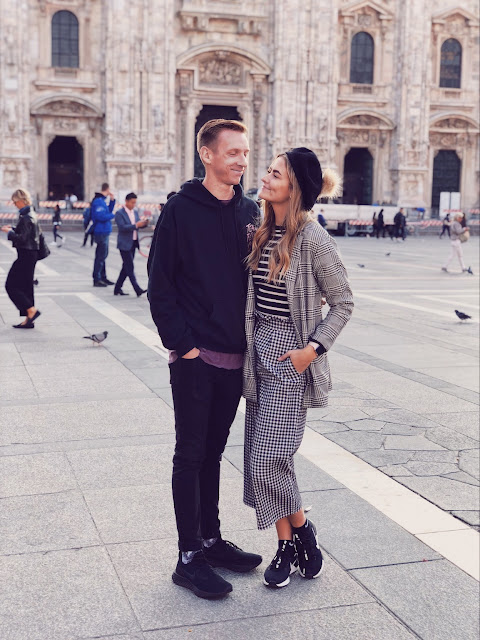 Ok, side note over... Back to Milan! My amazing & cute sister in law lived in Milan as an Au Pair, and so she gave us so many recommendations - check out her cute instagram here. We tried to hit as many recommendations as we could, and still didn't manage to get to them all! If you go to Milan, I definitely recommend this pizza place! Probably the best pizza I have ever had and my sister in law would go here with her host family, so we know it is native approved! ;) She also recommended Gelato Giusto, but we were unable to make it on our trip!

Milan is an interesting city because we didn't really talk about it much in my art history classes. In the Renaissance, Rome & Florence were the centers of the art scene and Milan really took the back seat. Even though Milan wasn't super popular, it still was a place that Leonard Da Vinci worked at times, and is actually home to the famous Last Supper!

Along with housing this famous work, Milan actually was the home base for the Sforza family. The Sforza family, who were basically the Medici family of Milan. They had claim to the Duchy of Milan and were rather large patrons of the arts! Leonardo Da Vinci actually traveled to Milan because he was searching for work & he was actually trying to work for the Sforza family as a military engineer.  In his application (see translated version of his application here), Leonardo lists all of his mechanical abilities, and leaves his artistic ones as a small side note! So crazy that his paintings are the reason he is so famous! The Sforza family is actually the reason the Last Supper was even created, because they are the ones that commissioned it! Sadly, I was unable to get in and see the Last Supper when we were in Milan (pro tip, if you are going to Milan, book a space to see the Last Supper ahead of time!). 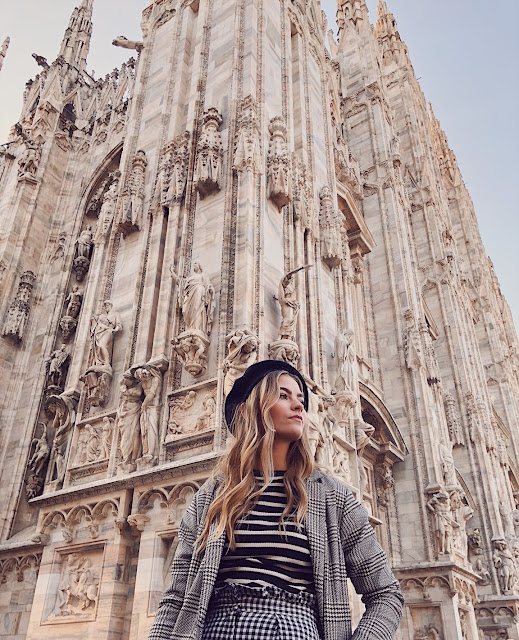 While we were there, we did get to see the Duomo. The Duomo is a very interesting Cathedral, and one that was quite controversial since it took centuries to build (from 1386 to 1965!). Over its construction, it had 78 architects... speaking of architects, did you know that Leonardo Da Vinic actually contributed to the plans for the Milan Duomo? I only recently learned this and I am constantly amazed by Leonardo's genius! His plans didn't end up being used though, but Leonardo lived right next to the Duomo and would analyze it everyday! Look at his plans below: 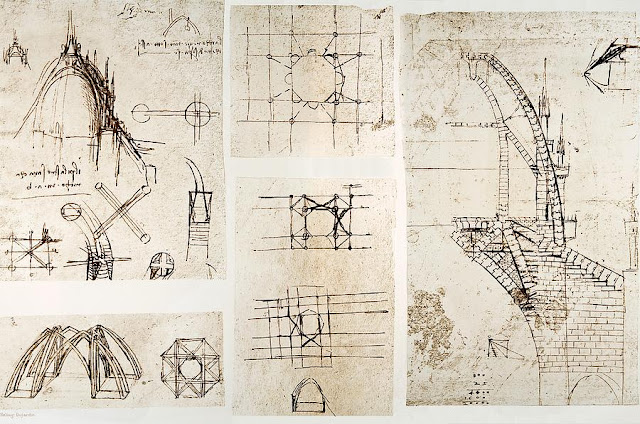 Along with having a bunch of architects,  there are more statues on the Milano Duomo than any other building in the world! The statues total at 3,159! The Duomo really has seen it all, and is quite hard for me to analyze since there are so many things going on stylistically. John Ruskin critiqued the Duomo and said that the cathedral steals from every style in the world and it spoils each one. He also said that the statues look like they were made by common stonemasons. While Ruskin hated it, Mark Twain visited it and loved it and remarked about how grand it was. When you walk in the Duomo, it is jaw-dropping how tall the entire structure is. I am always impressed by how they could build such grand buildings without modern technology! Although the composition is all over the place, I still think the cathedral is beautiful in its own way. 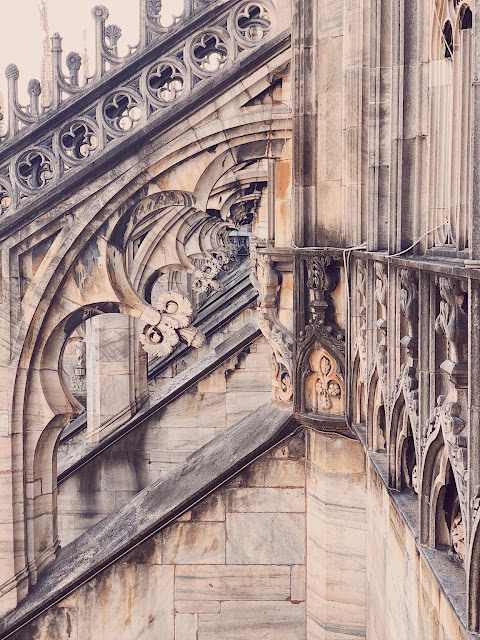 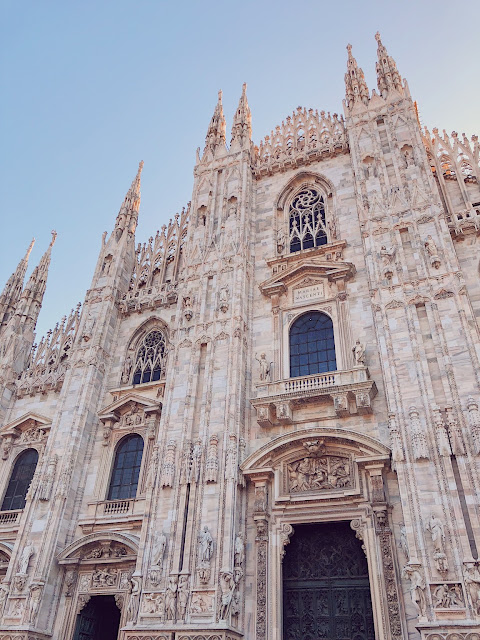 One thing that is super fun about visiting the Duomo is the ability to climb to the top of it and see the city of Milan & look at the statues up close. I loved this aspect and thought it really was a neat experience! 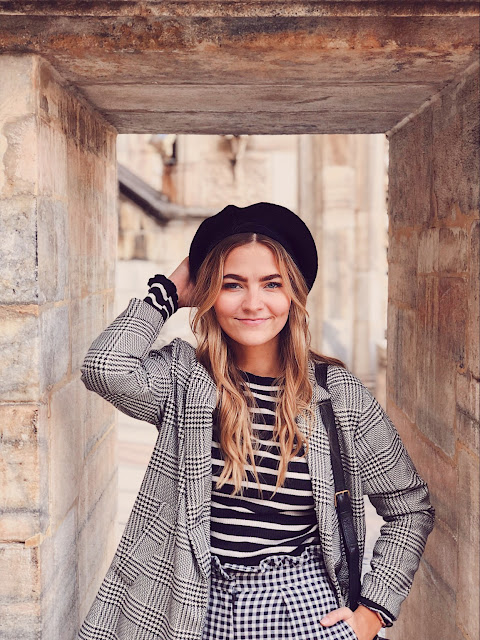 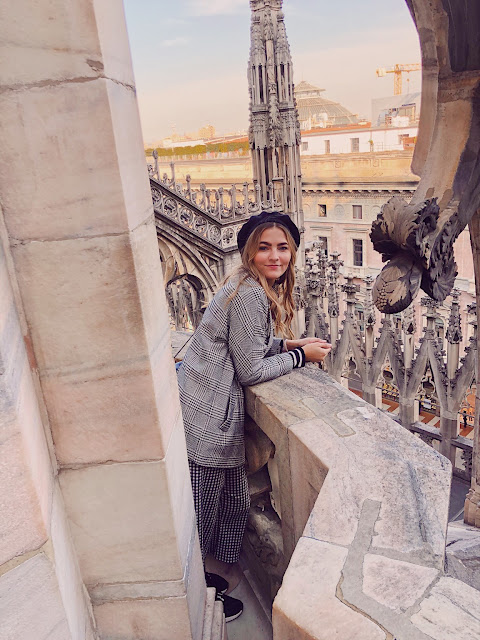 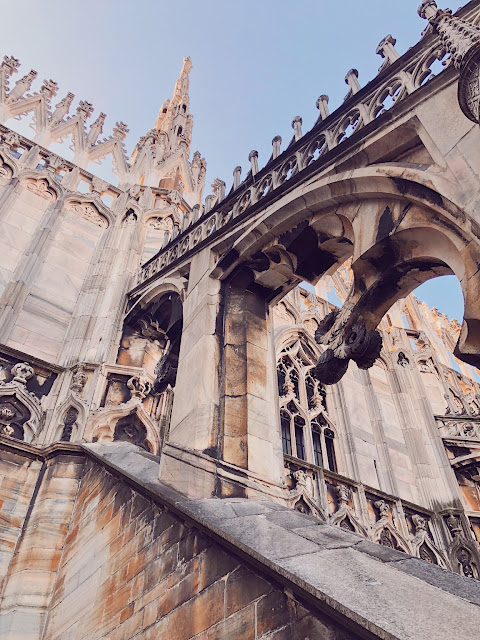 One thing that I really loved about the Milano Duomo was the color and texture of the marble & stone used on it. It is really unique compared to others that I have seen and I think it is my favorite marble that I have ever seen on a cathedral. 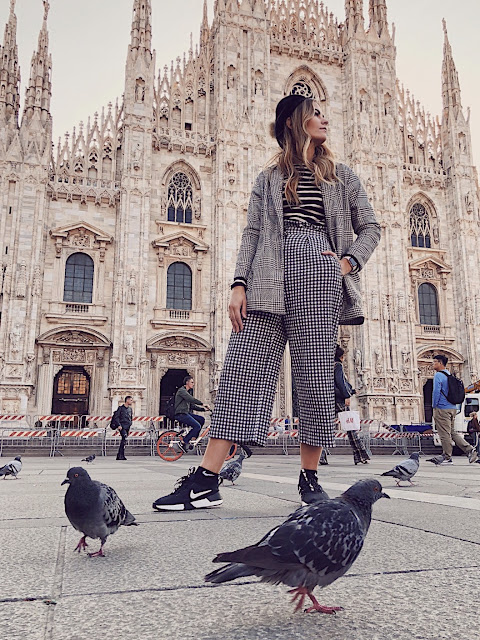 From Milan, we traveled to Venice. I will be posting about that soon haha, I started a new job and I am just a little bit behind on writing all my posts! I am so excited to share all the pretty things I have seen in Venice!